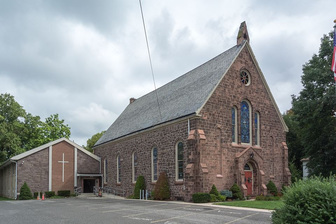 Methodism in Beverly, New Jersey began on August 10, 1802 when Charles and Lydia Fetters conveyed property at what is now Coopertown Road and Route 130.  The land was given for the purpose of building a church and forming a cemetery.  By 1849 the town of Beverly became the center of activity due to the railroad.  With this change of activity plans were quickly put into motion and a Methodist Church was erected on the corners of Laurel and Putnam Streets.  This church was dedicated on May 22, 1849.  But by October 1861 because of some hard times the congregation lost possession of the property to William Sharp, who held the mortgage on the property. The congregation then rented the church for $7 a month all the while giving serious thought to construction of a new church.  When the rent was raised to $8 per month it was decided to find new land to purchase.

The present Warren Street property was purchased for $800 on July 17, 1864 with greatly appreciated help from the Ladies Aid Society.  Plans drawn up by S. Sloan of Philadelphia were approved on January 30, 1865.  The estimated cost for building the church was $12,000.  A ground breaking service was held in June of 1867.  Based on the recording of a large offering being received it is assumed that the dedication of the building was done on August 23, 1868.  The final cost of this construction was $16,849.16 however the building was far from being finished.  In 1873 the interior was finished and a Sunday School chapel was added to the rear of the sanctuary.  A parsonage was added on the east side of the church for the cost of $1,774 in 1886. 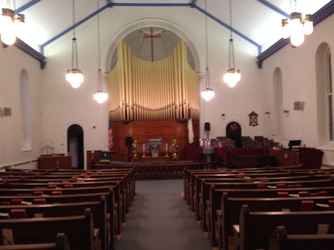 An organ was added in 1914, it was built by C. S. Haskell Company of Philadelphia and the church received a grant of $2000 from the Carnegie Foundation to help with the purchase.  The organ consist of 579 pipes ranging from six inches to eight feet in length.  Sixty pipes make up the gold gilded facade of the organ case.  The rest of the pipes are enclosed in the swell enclosure allowing the organist to control the organ’s volume by pedal action on the console.  The console is located to the right of the organ chamber.  Other than additions to organ and minor repairs the organ remained in its original state until March of 1995 when the entire organ was removed due to damage it sustained when the ceiling in the sanctuary collapsed on November 28, 1995. 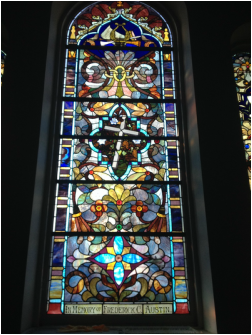 ​It is hard not to notice the beautiful stained glass windows that adorn the sanctuary, many of them are dedicated to the memory of former church members.  Much of the history of the people has been lost over time but we do know that some of the windows were dedicated to past pastors of our church.  One of the  windows was dedicated to Rev. J.B. Graw who served the church for one and a half years.  Another for Rev. James Rogers who served from 1889-1890.